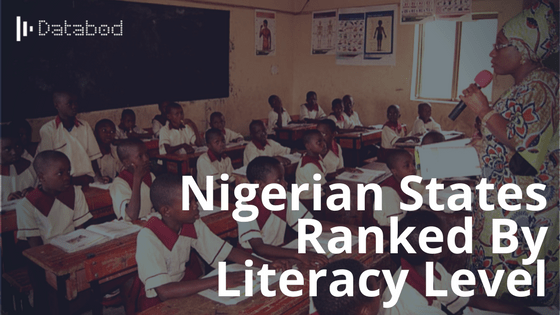 According to Wikipedia, Literacy is traditionally meant as the ability to read and write. The key to literacy is reading development, a progression of skills that begins with the ability to understand spoken words and decode written words, and culminates in the deep understanding of text.

Literacy can also be seen as a particular capacity and mode of behaviour, the ability to understand and employ printed information in daily activities, at home, at work, and in the community – to achieve one’s goals, and to develop one’s knowledge and potential.

This data shows that the states in the South-West rank really high on the Literacy scale while the states in the Northern part of the country rank really low. This ranking has been quite constant for a long time now and it would be great to see the state in the Northern region rank as high as the ones in the South. The education-deficiency in the North has not been properly addressed, even though it is quite glaring that there is a deficiency problem. The approach to the problem of education in the North is not being addressed adequately. The solution should not be something controversial, but involving.
“How can education be made to suit the cultural atmosphere of the North?” should be the question that the Education sector tries to answer.