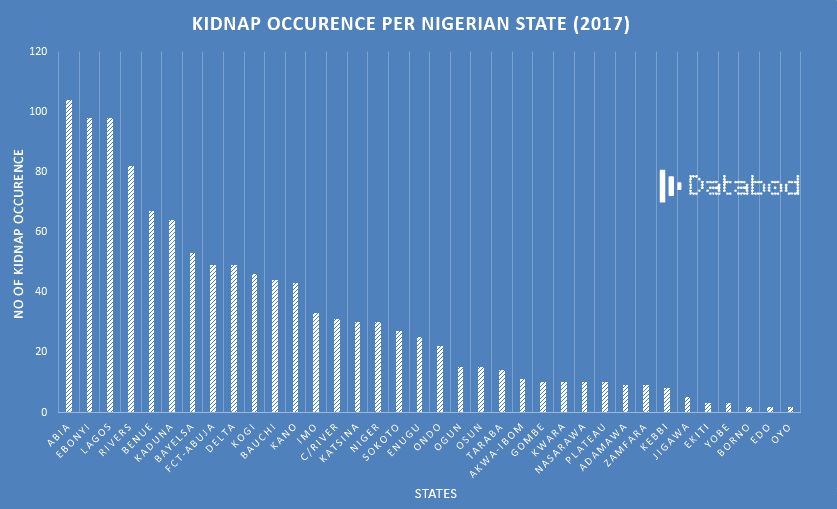 Over a thousand kidnapping cases were recorded in Nigeria, amounting to 1133 cases in total. The south accounted for majority of these kidnap cases. Abia state led with 104 kidnap cases while Ebonyi and Lagos closely followed with 98 cases each. Rivers recorded 82 while Benue recorded 67 cases.

Ranking among the states with the least number of kidnap cases recorded were Ekiti, Yobe, Borno, Edo and Oyo. Ekiti and Yobe each recorded 3 cases while the other three states recorded 2 cases each.

Kidnapping became prevalent in Nigeria after the famous political kidnapping saga in Niger Delta in February 2006. Foreigners were initially targeted to draw attention to the environmental degradation caused by oil and gas production. However, as kidnap for ransom proved very lucrative, other criminals began to exploit this crime as a potential goldmine.

Today, kidnapping has evolved into a heinous menace rearing its ugly head in various forms. There are kidnappings for political reasons, for rituals, for religious reasons and of course the original type which is kidnapping of children by a parent, due to custody issues.

To serve as a deterrent to this potential low-risk high-reward ‘’business’’, criminals should be served adequate jail sentences upon arrest and prosecution.