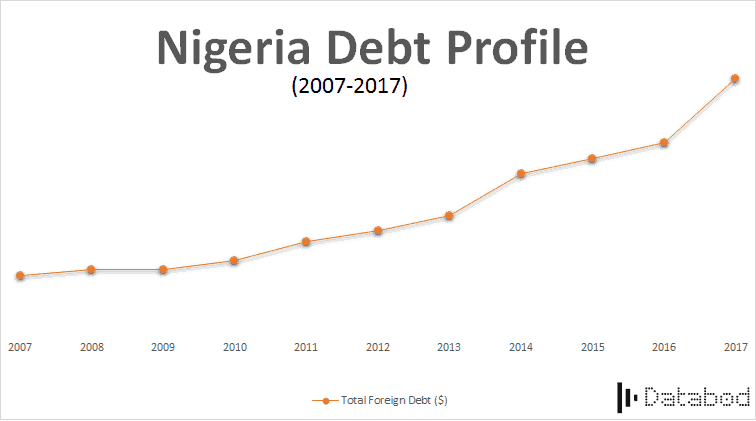 In 2006, Nigeria paid about $12.4bn to its foreign creditors in other to enjoy $18bn debt write off, from the country’s total external debt of about $30bn. Nigerians heaved a sigh of relieve from the crippling debt overhang.

By 2005, the cost of refinancing and servicing $30bn  external debt, was generally considered as unsustainable. Thus, after ‘debt exit’ in 2006, Nigeria’s debt profile became lighter, with barely $3bn as external debt, while domestic debt, excluding debts owed contractors was just over N1Tn.

Unfortunately, eleven years later, we are back in debt, in bigger debt.  Since 2010, Nigeria has been accumulating debt in an alarming rate. However, the rate of growth in Nigeria’s debt profile between 2015 and 2017 is particularly worrisome. Leading some analyst to the opinion that Nigeria is headed for bankruptcy.

Below are interactive charts telling the story of Nigeria debt profile from 2007 till 2017.

How Nigeria Under Retired General Buhari Borrowed $2,029 Per Second In Just 12 Months, Debt Profile Keeps Rising - Abiyamo - The Blog for Nigerians & The World